A Conversation with Tarana Burke 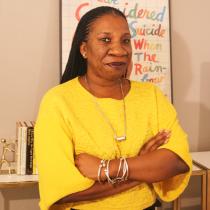 You Are Your Best Thing
A Conversation with Tarana Burke
Wednesday, Nov. 2, 6-7:30 p.m.

The Department of Human Development and Family Studies invites you to A Conversation with Tarana Burke on Wednesday, Nov. 2 at 6 p.m.

In her recent anthology, "You Are Your Best Thing: Vulnerability, Shame Resilience, and the Black Experience," edited by Burke and Brene Brown, Black people share their journeys as they navigate the continuing systems of oppression in our country. Burke has also shared her story of sexual assault and founded the "me too." Movement, which supports, uplifts, and inspires survivors of sexual violence.

Join Burke, Molly Countermine, HDFS associate teaching professor, and Marinda Harrell-Levy, HDFS associate professor, as they discuss insights that she has gleaned from nearly three decades working at the intersection of racial justice, arts and culture, anti-violence, and gender equity.

Attendees will be invited to submit questions via the Q&A function during the event. Closed captioning will be available.

Tarana Burke is best known for founding the "me too." Movement and has dedicated her life to social justice work and giving strength to those who have experienced sexual trauma or harassment. The #metoo campaign has generated over 13 million Facebook posts and Tweets, and has become a rallying cry for people who have survived sexual assault and harassment. Burke has been recognized as one of The Silence Breakers who were named TIME's 2017 Person of the Year, and has been named to TIME's 100 Most Influential People of 2018.

Burke has dedicated nearly three decades of her life to social justice and laying the groundwork for the movement that was initially created to help young women of color who survived sexual abuse and assault. Years before #metoo became a viral hashtag, Burke founded Just Be Inc., a non-profit that helps victims. Now, she is the executive director of the "me too." organization. As a public figure, Burke provides insight into the current state of affairs and outpouring of sexual assault and harassment allegations; addresses pressing issues of respect, dignity, and power dynamics in schools, workplaces, and politics; and shines a light on the stories of survivors and marginalized voices.

A Conversation with Tarana Burke will be facilitated by Molly Countermine, a teaching professor of Human Development and Family Studies at Penn State University Park, and Marinda Harrell-Levy, associate professor of Human Development and Family Studies at Penn State Brandywine. Among other courses, Countermine and Harrell-Levy teach HDFS 254N Reading Our Lives: Understanding Diversity and Human Development through Memoirs, which uses personal narratives, including “You Are Your Best Thing: Vulnerability, Shame Resilience, and the Black Experience,” to explore the diversity of the human experience. Countermine is the chair of the HDFS Committee for Justice, Equity, Diversity, and Inclusion (JEDI), and is a champion for diversity initiatives in the department. Harrell-Levy has been instrumental in developing diversity-focused curriculum initiatives across the campuses. She is a co-chair of the University Joint Curricular Task Force on Racial and Social Justice and chair of the Brandywine Chancellor's Commission on Racial and Ethnic Justice.

In the event of an emergency or crisis: