Current and Past Research

Back to Baby Basics Project

The B2BB project is a longitudinal study that followed babies over their first 18 months of life. The study examined how babies express their needs and whether this influences their behavior over time. Our aim was to examine the physical growth and emotional development of infants during this particular period of their lives, such as their crying, eating, and sleeping patterns, as well as their ability to be soothed or to soothe themselves. We have observed a variety of self-soothing and emotional regulation techniques among the children as well as parental involvement in assisting the soothing process.

Collecting the needed information for this study has included following participating families over a series of home and lab visits as well as questionnaires completed by parents. We met with families for the first time when the each child was 4 months old at the family home. We then conducted lab visits when each child was 6, 12, and 18 months old. We also brought a new group of families into the study, and conducted lab visits with these families at 6, 12, and 18 months.

We continue to work with the data that emerged from this part of the project.  Papers have been published and several of our graduate students have used this data for their master’s theses and doctoral dissertations.  Please check our publications list for the most recent journal articles.

The Foundations of Joy and Curiosity

The aim of our new project funded by the John Templeton Foundation is to understand how differences in temperament evoke certain parent behaviors to increase a child’s joy and curiosity.  Exuberant children are naturally happy children but they also exhibit a tendency toward frustration and anger.  This is because they are interested in new things and want to engage with them.  They are happy when they are able to “approach” new people and things but tend to be angry when they cannot.  Inhibited children, on the other hand, are more fearful of new things and people and so are more withdrawing and negative in these situations.  This does not mean that they are not capable of happiness but that they need safe, secure situations to feel happiness.  Both of these temperaments require parents to help them overcome their negative emotions so that they can experience more positive affect. 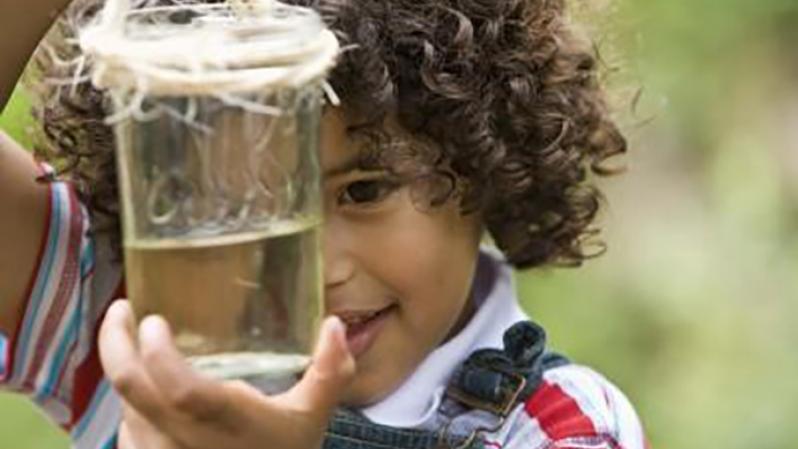 Curiosity, or the desire to explore, is an important character trait. It is related to happiness and other positive outcomes such as academic success and social relations. Curiosity may be related to temperament. Exuberant children may be more curious as they are more likely to explore because of their approach orientation while inhibited children may be less curious due to their withdrawal tendencies, particularly in novel situations. Again, parents are important to encouraging curiosity, either by directing the child’s attention or creating an environment that is safe to explore. No research to date has looked at temperament, parenting and curiosity. This study is expected to fill this gap.

Back to Baby Basics-Kids Project

B2BB Kids is thye preschool follow-up of the Back to Baby Basics longitudinal study. When children who participated in the B2BB study were 4.5 and 5.5 years of age they visited our lab and participated in a number of tasks and games including a risk room, puzzle tasks, a dress-up play session, watching funny videos, and doing science experiments.  As with the infnat/toddler study, we also gathered information about the children and families through questionnaires.  We are now in the final stages of our study, which involves parents completing questions about their child's health, emotional development, and academic achievement when the children are in their first year of formal schooling.  We are in the process of coding the videotapes from the 4.5 and 5.5 year lab visits and expect to have results to share in the coming year.

We want to thank all of our families for participating in the Back to Baby Basics Project.  We are grateful for your generosity of time and commitment to our study and hope that you are aware of the contribution you have made twoard increasing our understanding of child development.

As children develop they are increasingly asked to control their behavior. Waiting for food, walking but not running, and refraining from touching interesting objects are just a few of the prohibitions that children face. An example of this kind of developmental task is the tolerance of frustration. Being asked to stop playing and come inside to do a chore requires the child to inhibit feelings of anger about having to stop an enjoyable activity. This ability to control one's emotions is often referred to as emotion regulation. The development of the ability to regulate one's emotion is believed to be a product of the child's temperament and environmental influences, specifically parental socialization. One of the primary purposes of the Emotional Beginnings Project of the Infant and Child Temperament Laboratory was to investigate how infants and toddlers come to regulate their emotions.

The regulation of emotion may also be influenced by the child’s physiology. In this project we examined heart rate activity, specifically vagal tone, and related it to the child’s behavior during several tasks. Differences in resting vagal tone and changes in vagal tone to emotional and cognitive challenge may be a marker of one’s ability to control emotions and behavior. Thus, we may be able to better predict how well an infant can regulate their emotions and those infants who may need more external intervention.

The ability to regulate emotions also has implications for social development. For example, children who do not tolerate frustration and act out their anger have difficulties in school and with their peers. Thus, emotional dysregulation may be related to later behavior problems. Another goal of our project was to examine the relationship between early emotion regulation ability and later behavior problems.

To accomplish our goals we conducted a longitudinal study that was funded by the National Institutes for Mental Health. In this study children and their parents were seen several times from when the child was 2 weeks of age to 2 years of age. We used home visits, inoculation visits, and laboratory visits to gather our data. In addition, questionnaires and infant cry diaries were completed by parents. At the inception, 150 families had joined the project and we eagerly followed them through the infancy period.

Because behavior problems do not emerge until the preschool years, The National Institutes of Mental Health was very interested in having us follow up on our sample so funded us for another 5 years. In addition to investigating how early emotion regulation ability relates to behavior problems in preschool, we also expanded our investigation to include another measure of the child’s physiology - sympathetic activation (pre-ejection period), observations of behavioral control and executive function, and assessment of parenting behaviors. Toward that end we had children and their parents return to the laboratory when the children were 4 ½ , and 5 ½ for two visits, one with their mothers and one with their fathers. During the summer prior to entering first grade our participants returned in groups of 3 or 4 where they interacted with each other and completed a variety of tasks. The final data point was during the first year of elementary school when we had parents and teachers complete a number of questionnaires.

We are continuing to analyze the data from both phases of the Emotional Beginnings Project. Please check the publications page periodically to see what we have discovered.

Dr. Stifter has collaborated with Drs. Clancy Blair, Douglas Granger and Mark Greenberg on a study within a larger project called The Family Life Project. Below is a general description of this project. Our study, Project 1, is concerned with the characteristics of infants and children growing up in rural poverty. We are focusing on the child’s temperament and physiology including heart rate and cortisol reactivity.

Infant colic has been an enigma for parents, pediatricians and psychologists. Popularly defined as paroxysmal crying that lasts for a total of 3 or more hours per day/3 or more days per week colic has been poorly studied. Recently, however, researchers from the medical, psychological and nutrition fields have turned their attention to this intense but temporary condition and we were pleased to be a part of this effort. Because anecdotal accounts of colic have suggested some gastrointestinal involvement we proposed to examine its possible biological origins by using a noninvasive measure of gastric motility. The electrogastrogram (EGG) has been used with adults and studies have found that adults who suffer from motion sickness or experience nausea and vomiting exhibit patterns of gastric dysrhythmia. Thus, we hypothesized that infants with colic may be experiencing gastric discomfort which might be measured using the EGG.

Early studies of colic have also suggested that parents may contribute to their infants excessive crying. However, colic is not restricted to firstborn infants whose parents would have little experience. In addition, colic usually remits quite suddenly by 3 months of age which implies that parents became more sensitive overnight. In this study we examined parents’ personality, interactive style, and perceptions in an effort to clarify their role in their child's crying. 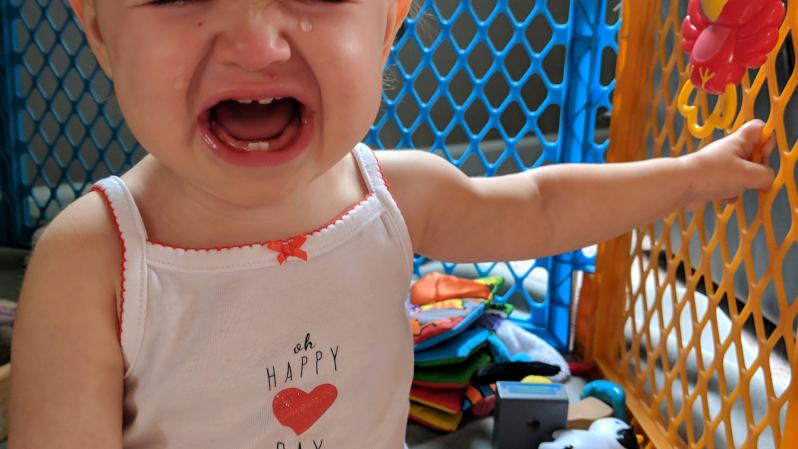 Finally, one of the criticisms lodged against colic research is that many studies are retrospective or rely on parents to refer their infant for problematic crying. Both methods introduce bias into the sample as a certain type of parent may complain of colic or remember their infants crying as intense. In our study we drew our colic sample from a normative community sample and determined through special interview techniques whether an infant was colicky or not. Infants and families were recruited and tested at 2 weeks of age before the onset of colic. Parents were called at 3, 4 and 5 weeks and asked open ended questions about their infants cry behavior. Based on these reports colic was identified. All parents were then asked to keep a 4 day, 24 hour diary that recorded the infants crying (and other states). This data then verified our determination of colic. While not completely without parental bias, this method reduces it significantly. In addition, by recruiting and testing infants before colic begins we are able to collect antecedent variables and test their predictions to colic.

The consequences of having colic were examined in this study. Infants and their mothers returned to our lab at 5, 10 and 18 months when we put them through a series of tasks designed to elicit different types of reactivity. We also assessed their interactive behavior with their mothers. Finally, at 18 months the infants' social competence was assessed in the form of compliance and empathic responding. Visit our [publications page, LINK] for recent articles on infant colic taken from the study.