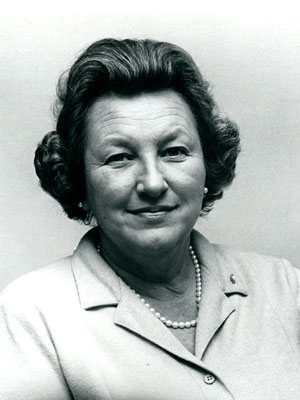 At a time when it was challenging for women to advance in athletics, Martha “Marty” Adams was there.

Instrumental in the creation and implementation of varsity women’s athletics at Penn State, Adams and others were instrumental in establishing Penn State at the forefront of women’s varsity athletics well before Title IX legislation in 1972.

As the Penn State community mourns the loss of Adams, who died on Jan. 12, 2017 at the age of 90, faculty, staff, and friends highlight the lasting impact she made—both in athletics and in resident instruction— throughout the University. Not only a pioneer in women’s sports at Penn State, she was a fixture in the former College of Health, Physical Education, and Recreation, predecessor to the College of Health and Human Development and in many ways contributed to what is now the Department of Kinesiology.

R. Scott Kretchmar, professor emeritus of exercise and sports science in the Department of Kinesiology, said every female athlete at Penn State owes a debt of gratitude to Adams.

“The many colleagues, students, and athletes who benefited from her leadership also knew she was a force to be reckoned with—large in stature, large in personality, and insistent, but always with a large smile on her face,” Kretchmar said.

“She championed equal opportunity for women in sport long before it was popular to do so. Additionally, she was a steadfast educator and believed that high academic standards and athletic excellence belonged together. As the head of our first academic support center for student athletes, she was a model of integrity.”

From Waynesboro, Pennsylvania, Adams was a member of the Penn State staff from 1954 until her retirement in 1987, completing a distinguished career spanning nearly 35 years in teaching, coaching, and athletic administration.

When Adams joined the Penn State staff her duties as head of women’s swimming included instructing and coordinating activity programs for students. In 1959, she was named Penn State’s chairperson of women's physical education. It was during her tenure in this position that she and Della Durant – also instrumental in the movement – worked with Penn State faculty to create a proposal to make nine women’s teams varsity sports.

The proposal was approved by then President Eric Walker, Ernie McCoy, the dean of physical education and director of athletics, and Sam Wherry, NCAA faculty representative. The program, initially titled "Extramural Sports for Women" began in the fall of 1964 with field hockey, expanding to eight additional varsity sports within the next year.

Thanks largely to the efforts of Adams, the "Extramural Sports for Women" program soon evolved into the "Women's Intercollegiate Athletic Program." By the time Title IX legislation in 1972 began forcing most colleges and universities to begin varsity sports for women, Penn State already had 12 varsity women’s teams competing.

Nancy Williams, head of the Department of Kinesiology, said Adams inspired her on many levels due to Adams’ accomplishments in the realm of academics and her dedication to promotion of women’s athletics at a time when it was not easy to make strides in support of women.

“I will always admire her positive outlook and dedication to Penn State,” Williams said. “It was always a highlight of my week if I had a lunch date with Marty and each time I did I learned something valuable. Her accomplishments and generosity have had a sustained impact on Penn State students and student athletes. She will be missed.”

Adams also served as program chair for two of the five National Institutes on Girls and Women's Sports which also fostered the development of the women's intercollegiate programs nationally.

Robert Ricketts, senior lecturer in the Department of Kinesiology, noted that during a recent gathering of retirees from the former College of Health, Physical Education, and Recreation, Adams was recognized as one of the key leaders in the field integrating education and sport.

“Marty Adams was an individual who clearly saw the strong link between academics and athletics,” Ricketts said. “As one reads about her long involvement with athletics, we need to be reminded that her roots were in the area of physical education and Marty truly reflected the passion for the integration of academics and athletics. She will be missed by many.”

Donations in Adams’ honor may be made to Penn State University, 1 Old Main, University Park, PA 16802 to be added to one of the following Martha A. Adams Endowments: