The new 2017 interns, who begin their program in July, include: 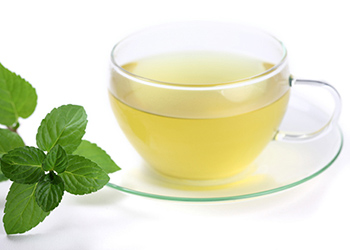 Green tea is touted for its many health benefits as a powerful antioxidant, but experiments in a laboratory mouse model of inflammatory bowel disease suggest that consuming green tea along with dietary iron may actually lessen green tea's benefits.

"If you drink green tea after an iron-rich meal, the main compound in the tea will bind to the iron," said Matam Vijay-Kumar, assistant professor of nutritional sciences. 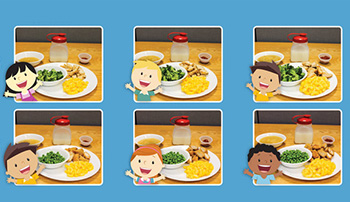 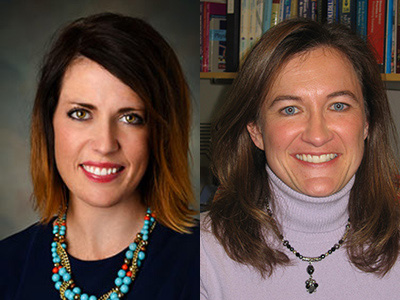 The Department is seeking a full-time, non-tenure track (fixed-term) instructor position, for the 2016–17 academic year, to support its undergraduate curriculum. The appointee will be expected to teach eighteen credits per year including lower and upper division nutrition courses as needed by the department and to participate in service related activities. The position will begin August 12, 2016.

Only applications that include a cover letter including a general statement of interest in the position as well as a statement of teaching interests, detailed curriculum vitae with publication list, and contact information for three references will be considered complete by the committee. For more information, contact Rebecca Corwin at rxc13@psu.edu or 814-865-6519. 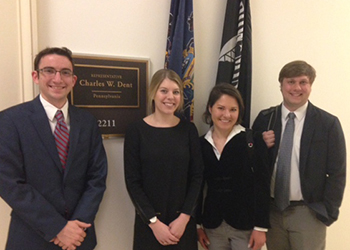 J. Kalina Urbanek, a doctoral candidate, visited U.S. Senators’ and Representatives’ offices on April 12 and 13 to advocate for increased and sustained funding for scientific research as part of the Congressional Visit Day (CVD). The event was organized by the Penn State Science Policy Society, which is part of the larger National Science Policy Group (NSPG).

Urbanek attended with other Penn State participants, Chris Rumble and Grayson Doucette, both doctoral candidates, from the Department of Chemistry. 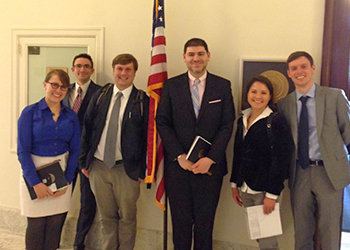 J. Kalina Urbanek, second from right, visited U.S. Senators’ and Representatives’ offices on April 12 and 13 to advocate for increased and sustained funding for scientific research. She traveled with Chris Rumble and Grayson Doucette, both Ph.D. students from the Department of Chemistry.

The first day of the event was spent learning how to communicate science to a general audience. The second day consisted of the visits to Senators' and Congressmen' offices, Urbanek said. The Penn State group visited the offices of Senators Bob Casey, Pat Toomey and Mark Warner, and Representatives Glenn Thompson and Charlie Dent.

"While on Capitol Hill, students were encouraged to convey their passion for science by talking about their research, time and effort spent in the lab and the impact the government has on more local issues, such as funding for research or jobs at Penn State. We also discussed more general ones, such as the health of people around the globe," Urbanek said.

"My task was to talk about the problem of Vitamin A deficiency in low-income communities and the impact of publicly sponsored supplementation programs," she said. "The trip was a great learning experience and I highly recommend it." 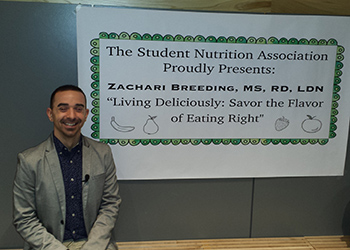 The Student Nutrition Association promoted National Nutrition Month in March with a variety of events on campus. An endowment grant from the College of Health and Human Development funded the events.

Three of the events included: 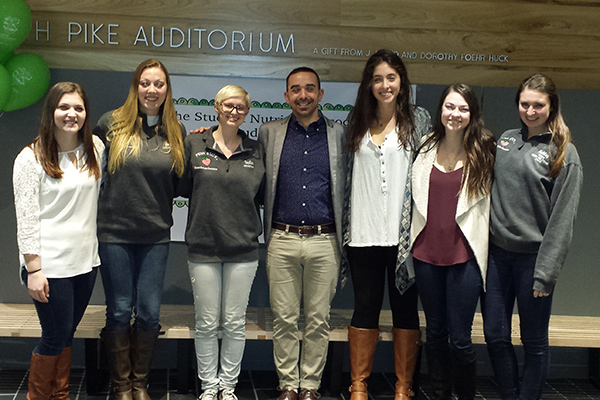 Shana Adise, Ph.D. candidate in the Childhood Obesity Prevention Training (COPT) fellowship, was principal investigator on the COPT SEED grant titled, "The Role of Reward and Inhibitory Control Pathways in Overeating in Healthy and Overweight Children," and co-investigator on the COPT SEED grant, "Examining the Relationship between Puberty and Reward Sensitivity in Overweight and Healthy Weight Adolescents."

She also received the following awards:

Over the past five years the COPT SEED grant has funded sixteen graduate students in the Departments of Nutritional Sciences and Human Development and Family Studies. Co-directors are Kathleen Keller, assistant professor, and Jennifer Savage Williams, assistant professor and interim director of the Center for Childhood Obesity Research.

Students in the COPT presented their research findings at the annual meeting of the American Society for Nutrition (ASN) in April, in San Diego, California.

COPT is an interdisciplinary pre-doctoral graduate training program that spans several units in the College of Health and Human Development. The program aims to prepare a new generation of scholars to address the issue of childhood obesity.

Graduate students in the program worked with local public television WPSU to create a video describing their studies. Barbara Rolls, director of the training program, showed the video in a presentation about the Penn State training grant at the ASN meeting. The students have also developed a blog that describes their activities.