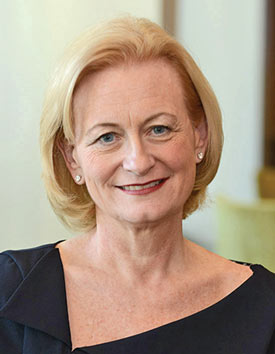 As president and chief executive officer of the National Restaurant Association, Dawn Sweeney has been instrumental in focusing the mission of the Association through a unique, multi-year strategic plan, highlighting key areas of opportunity within the restaurant industry.

The National Restaurant Association’s members include quick service, fast casual, managed foodservice, casual and fine dining – along with manufacturers, suppliers and distributors. The American restaurant industry is composed of nearly one million restaurant and foodservice outlets and over 13 million employees. Since taking the helm at the end of 2007, Sweeney has led the Association in a wide-range of policy issues, while offering services and products that promote the industry and help individual operators and large multi-unit companies succeed.

Sweeney has realigned the Association’s priorities and structure to strengthen its core operations, including consolidating its Foundation around a mission to develop a strong workforce and build the next generation of industry leaders. The National Restaurant Association Educational Foundation’s major goal is to educate students on the restaurant business through the ProStart program – running in high schools nationwide – and to provide educational scholarships

Sweeney has led the Association to several major legislative victories, including achieving federal legislation on menu-labeling, and has launched the first-of-its-kind children’s menu initiative – Kids LiveWell. Under her leadership, the Association’s annual tradeshow – the largest restaurant and hospitality industry tradeshow in the U.S. – has seen growth both in revenue and impact.

Before joining the National Restaurant Association, Sweeney was president and CEO of AARP Services, the wholly owned taxable subsidiary of AARP. She grew annual revenues from $175 million to $785 million during her tenure – serving 11 million AARP members annually. Her 25+ years of marketing, advocacy and policy experience also include leadership positions at the National Rural Electric Cooperative Association, a membership organization of consumer-owned electric utilities, and the International Dairy Foods Association, the trade association for the nation's dairy foods industry, where she played a major role in the launch of the “milk moustache” advertising campaign.

Sweeney has been named one of the perennial top association CEOs in the country for the past several years. She serves on the boards the U.S. Travel Association and the Women’s Foodservice Forum, and is an active member of the U.S. Chamber of Commerce’s Committee of 100, the International Women’s Forum, and the Committee of 200, an international network of female executives. She is also a charter member of Child Obesity 180, an initiative of private, public, non-profit and academic leaders committed to helping prevent childhood obesity through evidence-based initiatives.

A native of Maine, she is a graduate of Colby College and earned her MBA at George Washington University. Sweeney lives in northern Virginia with her husband and teenage son.