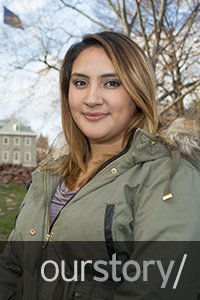 When a weekend or semester break arrives for Jesica Villagomez, she is not simply taking a breather from her studies at Penn State.

Instead, Villagomez is working as a clinical technician for a drug and alcohol rehabilitation center where she leads support groups, group activities, and therapy exercises to help patients cope with their addiction triggers.

“I wanted to do this work because I like helping others and it’s when you see people at their worst where you can actually make a difference,” Villagomez said. “Some of these people come in and they’ve lost everything. You get to know them while giving them the tools they need for when they get out of rehab.”

Villagomez’s time working at the rehab center has revealed what she views as flaws in the health care system. For some patients, regardless of their progress, their health insurance covers a set number of days for treatment.

“After a certain day, they have to leave,” Villagomez said.

The observation enhanced her interest in Penn State’s Department of Health Policy Administration (HPA). If Villagomez manages a rehab one day, she said she would try to work with insurance companies to change the rigidness of policies.

More than 4,500 Penn State students are enrolled in the College of Health and Human Development (HHD) studying a wide-array of fields, each committed to the concept of improving the quality of life for others. Villagomez found a home in HPA.

Villagomez, who is Hispanic, first became interested in HPA after taking a course with senior lecturer Tom Knarr, particularly because the course covered the impact the health care system has on minorities. During the course, it occurred to Villagomez that while growing up, she never saw her father go to the doctor.

“I never made the connection until I took this class, but it made sense. I want to help Hispanics get more involved with the health care system,” she said. “What interests me the most is health literacy and if I do go on to become a manager of a practice I would focus on trying to get my community to go to the doctor and help them to understand medical terminology because it’s kind of scary to go to the doctor and not understand your primary physician.”

After graduation, Villagomez hopes to return to her home in southern Chester County, Pennsylvania, and work for her local community, which has a large Hispanic population.

“What I’ve learned is that I like to organize and I like to be hands-on and if there’s a problem I like fixing those problems while helping others, and for me it’s more specifically a desire to help my community,” she said.