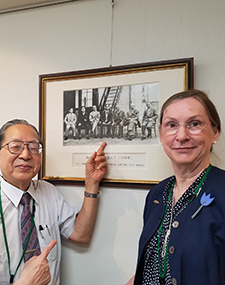 A. Catharine Ross at the RIKEN archives in Tokyo

A. Catharine Ross, department head, professor of nutritional sciences and physiology, and holder of the Dorothy Foehr Huck Chair in the Department of Nutritional Sciences, is in Tokyo, Japan for her Fulbright Scholarship, where she is teaching at Kagawa Nutrition University. Since arriving in Tokyo she has visited the Kagawa College of Culinary and Confectionery Arts, observing courses on how to cook Mackerel and prepare Japanese Hot Pot. In September, she gave a keynote lecture at RIKEN—a large research institute in Japan—for a colloquium on women scientists, and visited the RIKEN archives, which contain information on early vitamin research in Japan. Ross also visited the Ajinomoto Foundation for Dietary Culture, which has an extensive collection on foods and agricultural practices.

This semester, the Student Nutrition Association hosted the Center for Women’s Services to talk about body image, and a food drive for the Lion’s Pantry. Other events included graduate school night and LinkedIn headshots. The peer mentoring program is also being continued. For more information about the group or to get involved, email president Morgan Fink at mef5390@psu.edu.

Alumni in the Classroom

Students in NUTR 371 (Dietetic Internship Preparation) attended a special Alumni in the Classroom event in October. Two former nutritional sciences dietetics alumni spoke about their experiences during their Dietetic Internships: Katie McNitt NUTR ‘14 discussed her experience at the University of Houston Dietetic Internship, and Missi Townsend NUTR ’17 appeared remotely, through ZOOM. She is currently at Tufts University in Boston completing a combined Dietetic Internship and master’s degree program. The students found the opportunity to speak with these former graduates to be very helpful and left a bit more confident about what lay ahead.

Alumni and faculty members attended the Academy of Nutrition and Dietetics annual Food and Nutrition Conference and Expo (FNCE), an annual event that draws nearly 10,000 dietitians from around the country. The conference took place in October in Chicago, Illinois. A nutritional sciences alumni reception was held during the conference with close to 40 alumni in attendance.

The Penn State Dietetics program held an internship fair on Oct. 17 in the Bennett Pierce Living Center on the University Park campus. Approximately 80 seniors in the dietetics class attended, as well as nine invited students from the Messiah College nutrition program. Students had the opportunity to speak with Dietetic Internship representatives from nine programs in the region. The fair has occured annually since 2008. The students have found the experience to be helpful as they prepare to apply to dietetic internships. The Dietetic internship programs also find it a good way for their programs to market themselves to Penn State students. The department's most recent dietetics class had an 84 percent match rate, while the national average was about 50 percent. The programs in attendance this year were:

Rebecca Skotek ’16 NUTR, completed her dietetic internship at Meredith College in Raleigh, North Carolina. During the program she was nominated by her peers and received the 2016-2017 Dietetic Internship Leadership Award.

The Master of Professional Studies (MPS) in Nutritional Sciences is a 30-credit online graduate degree program that may be completed in 24 months of study. This program is designed to prepare graduate students for evidence-based advanced practice and leadership in the field of nutrition and dietetics. The program is suited for Registered Dietitians who are interested in advancing their career with a graduate degree, or students from other health or science-related backgrounds who are seeking cross training in nutrition or a career-change.

The courses in the program are developed through a high-quality, two-semester course development process, and are student-centered, focus on higher-order thinking skills, incorporate meaningful use of technology, and are directly applicable to the work place. The program culminates in a capstone project in which students identify an issue or problem in their work setting, and produce, implement and evaluate an evidence-based solution.

Thus far, the MPS in Nutritional Sciences program has attracted a diverse pool of applicants that are reviewed on a rolling basis. New students are accepted every semester, and applicants may apply to the program with a planned start of fall, spring or summer semester.

Penn State Dietetic Internship (DI) alumni are offered the opportunity to apply up to nine graduate credits earned during the DI towards MPS in Nutritional Sciences graduate coursework.

The department seeks applications for an investigator in the science of ingestive behavior at the level of associate or full professor. The successful candidate will be an established scientist who is dedicated to advancing the field of ingestive behavior through innovative research, and with a record of external funding. Applicants should have academic training in nutrition or a related discipline (e.g., physiology, neuroscience, food science, biobehavioral health, psychology, public health, bioinformatics) and have demonstrated expertise in ingestive behavior.

The department also seeks applications for two tenure-track positions with a focus on the physiological regulation of metabolism and/or the interface of nutrition and the microbiome. Both positions are open at the assistant professor (tenure-track) or associate professor (tenure-eligible) rank. This position will complement the research of existing faculty, which includes research related to prevention of cardiovascular disease; chemosensation; mechanisms of obesity; studies of diet, physical activity and cancer prevention; research on genetic models of inflammation; micronutrient metabolism in animal models or humans; epidemiology, and/or global health nutrition. The successful applicant’s research can be basic using cell and animal models; translational using basic and clinical models; and/or clinical with a focus on human metabolism and its physiological regulation or the nexus of nutrition and the microbiome. 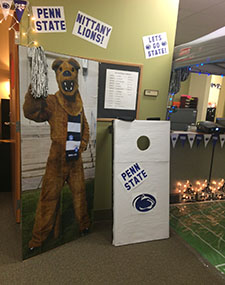 The department celebrated its tenth door decorating competition for Halloween 2017. The competition was started by a former faculty member as a way to boost morale in her lab and encourage team work among the various labs and offices in the Department of Nutritional Sciences.

The contest was opened for all of Chandlee Lab. Labs from the Department of Biobehavioral Health participated as well.

Previous celebrations have featured live music from the Nittany Mountain Trail Rides and the Hayride Band.

The Nutrition and Dietetics Alumni Society (NDAS) and the Kinesiology Affiliate Program Group co-sponsored a free workout and networking event at the Penn State Center in Philadelphia in August, which was attended by students and alumni. The College of Health and Human Development encourages alumni groups to host similar events around the State College area. The NDAS board began a new term of service in September by welcoming three new board members: Mike Flock, Nick McCormick and Chantal Kropp. The NDAS will host a series of events the weekend of Feb 24-25, 2018, including a career panel for graduate students, a speed networking event, and brunch.

Save the date! The annual NDAS brunch will be held at 11:30 a.m. on Sunday, Feb. 25 at the Nittany Lion Inn. The event will feature networking, a department update and award presentations. Further details to follow.

The NDAS is run by a volunteer board and is in need of new directors, including president or president-elect. For more information contact Barbara Kochanowski, president, at bkochanowski@msn.com.

Support the Department of Nutritional Sciences through gift planning

Gift planning may allow you to make a gift of surprising significance to the Department of Nutritional Sciences, now or through your estate, while realizing financial advantages such as a lifetime income stream or lower estate taxes. At the same time, you can enjoy the satisfaction of knowing that you are providing vital future support for our students, faculty, or programs.

To learn more about securing the future of the Department of Nutritional Sciences–as well as the benefits to you, your heirs, and your estate–please contact Kathleen Rider, director of development, at 814-865-1064 or kmr8@psu.edu.