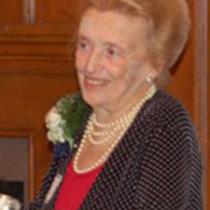 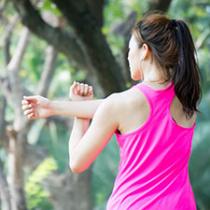 Researcher to study the effect of exercise on breast cancer metastases
Connie Rogers has been awarded a scientific research grant by the American Institute for Cancer Research (AICR).
Read More >>

From left, Lynn Parker Klees, Shawnee Kelly and Gina Pazzaglia at the 2018 Pennsylvania Academy of Nutrition and Dietetics Annual Meeting on April 7. Klees and Pazzaglia were awarded the Outstanding Dietetic Educator award.

The Student Nutrition Association hosted a a table at the HUB-Robeson Center in honor of National Nutrition Month in March, where they provided educational materials.

The Student Nutrition Association (SNA) has reached out to the community in a variety of ways this past semester, including volunteering at the downtown State College Meals on Wheels, collecting food for the the Penn State Lion’s Pantry, and volunteering with University Health Services' cooking night. During National Nutrition Month in March the SNA hosted a table at the HUB-Robeson Center. The National Nutrition Month speaker was Julia Grocki, RDN and LDN, who presented, "Building a Healthy Relationship with Food with Mindfulness."

The SNA also held elections for the next academic year. Congratulations to the board members for the 2018-2019 school year:

For more information about the SNA or to get involved, email president Mackenzie Lombardi at mpl5323@psu.edu.

The Nutrition and Dietetics Alumni Society (NDAS) sponsored a series of events for alumni and students on Feb. 25 at the Nittany Lion Inn. The event featured a networking event in which alumni met with students to share career experiences and advice. Alumni Nick McCormick, Mike Flock, Jill Jayne, Heather Rudalavage, Sarah Brandmeier, and Chantal Kropp shared their experiences with students.

Approximately one-hundred students, faculty and alumni attended the brunch, in which two awards were presented: the John Edgar Smith Outstanding Senior Award to Ella Lundquist, and the Outstanding Nutrition Alumni Award to Sandra Schlicker. Laura Murray-Kolb, associate professor and professor-in-charge of the graduate program, presented an update on department accomplishments. Connie Rogers, associate professor of nutrition and physiology, presented the research in her laboratory about the role of nutrition in modulating inflammation and immune responses.

Alumni interested in getting more involved with NDAS should email ndas.apg@gmail.com and join our NDAS Facebook group.

Since the inaugural MPS class in Summer 2017, the program has seen consistent, positive growth in student enrollment.

"We are also receiving very positive feedback from students," said Gina Pazzaglia, MPS director. "For example, a number of our students have noted that they are taking skills learned in the graduate courses and directly applying them in their workplace to advance practice or make policy and program changes."

The Master of Professional Studies (MPS) in Nutritional Sciences is a 30-credit online graduate degree program that may be completed in 24 months of study. This program is designed to prepare graduate students for evidence-based advanced practice and leadership in the field of nutrition and dietetics. The program is suited for Registered Dietitians who are interested in advancing their career with a graduate degree, or students from other health or science-related backgrounds who are seeking cross training in nutrition or a career-change.

The courses in the program are developed through a high-quality, two-semester course development process, and are student-centered, focus on higher-order thinking skills, incorporate meaningful use of technology, and are directly applicable to the work place. The program culminates in a capstone project in which students identify an issue or problem in their work setting, and produce, implement and evaluate an evidence-based solution.

Thus far, the MPS in Nutritional Sciences program has attracted a diverse pool of applicants that are reviewed on a rolling basis. New students are accepted every semester, and applicants may apply to the program with a planned start of fall, spring or summer semester.

Penn State Dietetic Internship (DI) alumni are offered the opportunity to apply up to nine graduate credits earned during the DI towards MPS in Nutritional Sciences graduate coursework.

For more information about the MPS in Nutritional Sciences program, contact Pazzaglia at gps3@psu.edu or Shawnee Kelly, MPS coordinator, at smc28@psu.edu.

Thank you to those who have helped the Department of Nutritional Sciences' journey towards a Core Nutrients Lab, where students will be able to see, collect and analyze samples as part of their undergraduate studies, and where faculty and graduate students will be able to perform research to answer questions about how micronutrients affect critical stages of development. The campaign is still open. For more information or to make a gift, visit www.giveto.psu.edu/Nutrition.