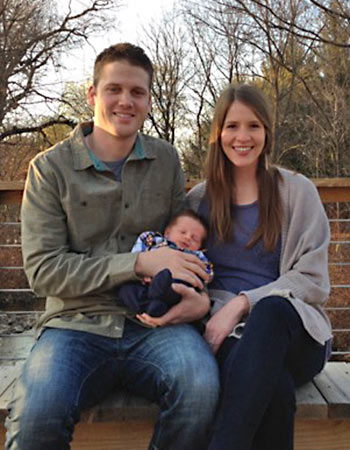 Derek Hartman never would have envisioned leaving Idaho with his pregnant wife to earn a master’s degree in health administration at Penn State while assisting a rural Pennsylvania hospital with operations.

Hartman wanted to be an architect. That was the goal for most of his life. When he enrolled at Brigham Young University-Idaho, selecting construction management as his undergraduate major was a no-brainer.

There was just one problem.

More than 4,500 Penn State students are enrolled in the College of Health and Human Development (HHD) studying a wide-array of fields, each committed to the concept of improving the quality of life for others. Hartman, who found a home in the Department of Health Policy and Administration (HPA), is one of those HHD students, and this is his story.

Seeing Hartman struggle with his career choice, a friend studying health care policy at BYU-Idaho, along with a family friend already working in health care administration, shared with Hartman the exciting aspects of the field. Soon he was enrolled in an introductory course.

“It was just a stark difference between how I felt in construction management classes. It was interesting. It was fun,” Hartman said. “I liked the business side of it and I’ve always liked hospitals. My wife hates hospitals, hates needles, hates being there, but every since I was younger I’ve always thought the hospital was fun. I loved to go visit. It never bothered me.”

Hartman selected Penn State without ever stepping foot onto University Park campus. That’s because a visit to BYU-Idaho by Jonathan Clark, executive director of Penn State’s Master of Health Administration program, turned out to be all of the convincing he needed.

“The visit was personal, passionate and engaging. He described the Penn State program and culture in a way that made me excited,” Hartman said. “He described the faculty, some of their backgrounds, and how the Penn State MHA program is one of the top 20 in the nation. He told me about the relationships the program has with other organizations and the opportunities previous students have seen.”

And so, in August, Hartman drove a U-Haul to Central Pennsylvania as his wife, Taylor, who was seven months pregnant, and his mother-in-law followed behind. Just a few weeks into his first semester, on Nov. 4, their son Hyde was born.

Hartman now balances being a husband, father and student all at once, while also completing a graduate assistantship at Tyrone Hospital through the Pennsylvania Office of Rural Health. At the hospital, Hartman works with CEO Stephen Gildea on various projects, such as testing a new TeleMedicine software system for doctors and organizing physician and managed care contracts.

While Hartman worked in a medium-sized hospital in Idaho, he says he is gaining a completely new perspective while working at Tyrone Hospital.

“They have to be a lot more creative in ways to get the same amount of work done that a larger organization would have to get done. They have less to work with,” Hartman said. “They don’t have as many contributors. It’s harder to get physicians to stay there and work there because it is such a rural area. They have to fight a little bit harder for everything with considerably fewer resources than other larger hospitals.”

While moving to Pennsylvania was a life-changing decision, Hartman says he and his family are comfortable with the decision. Since arriving, they’ve explored the East Coast, from Pittsburgh, to Philadelphia to Washington, D.C., as well as local areas such as Boalsburg, Bellefonte, and of course Penn State football at Beaver Stadium.

“Coming here is a whole new world,” Hartman said. “We’ve loved it out here. We’ve tried to really jump in and take in as much as we can.”