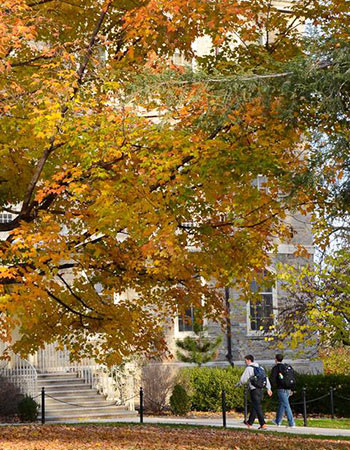 And with seven other siblings and tons of nieces and nephews, the Landingville, Pennsylvania native is no stranger to being around lots of them.

Celani’s passion for people coupled with her large family background helped direct her studies, which ultimately became human development and family studies and education. Instead of just seeking one of these majors, Celani pursued both. And Penn State’s offerings have helped enable her goals.

More than 4,500 Penn State students are enrolled in the College of Health and Human Development (HHD) studying a wide-array of fields, each committed to the concept of improving the quality of life for others. Celani, who found a home in the Department of Human Development and Family Studies (HDFS), is one of those HHD students, and this is her story.

First enrolled at Penn State – Schuylkill, Celani’s schedule was full of education classes. Noting her love of working with others, Celani’s adviser recommended she enroll in an HDFS class, she said. The class, which focused on child development, involved a project that gave her the opportunity to observe children, she said.

“I loved the atmosphere,” she said.

From that moment, Celani piled on the HDFS classes.

Eager to finish college with degrees in both HDFS and education, Celani moved to the University Park campus in 2013, where her academic plan could be better supported by concurrent majors.

Now Celani is double majoring in HDFS and elementary education, and is set to graduate in spring 2015.

After graduation, Celani would like to find a job as an elementary education teacher.

“With both degrees it will be easier to find a job in the meantime,” she said.

Celani said she uses what she learns in her HDFS courses to manage and fuel her own relationships with family and friends, as well help her in education classes.

Through HDFS infant development courses, Celani is able to bring to the classroom ideas and thoughts on what strategies and programming teachers should be implementing developmentally, such as what books are age-appropriate, and how children of a certain age think or act, she said.

“I feel I have a deeper understanding of the child as a whole,” she said, “As opposed to just the child in the classroom setting.”

Seeing the spark children get when they understand something new, Celani said, brings her the most joy.

“To see a love for learning brought a new love of learning for me,” she said. “I just really like the idea of helping people learn, opening their minds, and teaching them that their thoughts matter.”

She added, “It would be fulfilling for me to continue this work.”

Celani said she decided to pursue HDFS additionally, instead of just majoring in education, because HDFS work can be related to almost any career, and classes within the major can be applied to many different life situations.

“My story is different because I’ve always been around so many people,” she said. “What I learned from family studies can apply to real life.”

The HDFS major also presents numerous options, Celani said. With it, she can go into human service or research, or go back to school.

“I like the comfort of being an HDFS major because I have all these options,” Celani said. “The HDFS major deals with a wide range of people and services.”

In addition to HDFS, there are a variety of areas for students to study within HHD through the Departments of Biobehavioral Health, Communication Sciences and Disorders, Health Policy and Administration, Kinesiology, Nutritional Sciences, Recreation, Park, and Tourism Management, and the School of Hospitality Management.