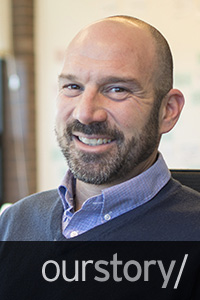 As a young child, Peter Newman’s parents took him to a National Park where he met a park ranger who let him try on the trademark ranger cap.

Newman’s entire childhood was filled with outdoor experiences, from camping to backpacking to skiing. For vacations, his family and neighbors lived on the edge with experiences such as staying at a ski cabin in Vermont with no heat in the middle of winter.

“My passion for the outdoors came from my parents,” Newman said. “Growing up, there was a theme of adventure.”

Newman spent his summers at camp, including one in Maine where his father served as director. In seventh grade, Newman biked with a group along the coast of Maine, camping overnight along the way. As a teenager, he completed a 30-day Outward Bound course on a sailboat off the coast of Maine. He also worked as a camp counselor.

From a young age, spending time outdoors through vacations and seasonal jobs was a natural part of life.

In college, Newman studied political science and prepared for a career as a public affairs journalist. During a study abroad semester in London, he got a taste of that life. He covered press conferences, wrote articles for Moneywise Magazine, and wore a suit and tie everyday. The fast-paced experience was exciting and memorable.

The very next semester, Newman took a 180-degree turn and started a second study abroad program in Ecuador where he assisted with research on rain forest ecology and the El Nino-Southern Oscillation.

“We looked at the intersection of people and the environment, and how a weather event can shift an ecosystem and economy,” Newman said.

Next, Newman completed an internship at Frank Church-River of No Return Wilderness in Idaho. There, the awe he had as a child while trying on a ranger’s cap came rushing back.

“I was hooked. I wanted to be a ranger,” Newman said.

While Newman did earn his undergraduate degree in political science, he let go of his plan to pursue journalism.

Instead, Newman worked as an instructor for the Yosemite Institute and led backpacking trips through Yosemite National Park, which introduced him to the complex challenges within National Parks, such as preservation and overcrowding. The first year Newman worked at Yosemite, the park saw nearly four million visitors.

“It opened my eyes to the issues of visitor use in national parks and the difficulty of balancing use and preservation,” Newman said.

Newman then achieved his goal and became a seasonal park ranger and worked in wilderness restoration for several summers. Along the way he completed his master’s degree.

One summer, while out on the trails, Newman bumped into Robert Manning, who studied national parks as a professor at the University of Vermont. The pair discussed the challenges of meeting visitors’ needs while also preserving wilderness. The shared passion led Newman to enroll at the University of Vermont where he earned his doctoral degree under the mentorship of Manning.

As Newman completed his education and spent more time at Yosemite, he developed a specific appreciation for natural sounds.

“As a park ranger, I loved the nights that I was out in the back country and getting ready to fall asleep. It was one of the most magical things – lying in a bivy sack on a cool night while looking up at the unbelievable sky and hearing the amazing sounds of the coyotes,” Newman said. “That’s where I experienced some of the best nights of sleep in my life.”

As head of the Department of Recreation, Park, and Tourism Management at Penn State, Newman and fellow researchers study national park assets and challenges, including soundscapes.

A focus on soundscapes developed for Newman through other national park studies. Survey respondents would write in their open-ended responses that the purpose of their visit was to experience “peace and quiet,” and sometimes that expectation went unmet. Seeing a problem, Newman’s focus shifted to how natural sounds improve recreational experiences for visitors as well as support physical and mental health, and how manmade noise can impact national parks for both wildlife and visitors.

Additionally, Newman, Manning and fellow researchers co-authored the book, Sustainable Transportation in the National Parks: From Acadia to Zion, which focuses on transportation in national parks and appropriate visitor capacity while taking into account ecological sensitivity.

Today, national park managers use Newman and colleagues’ research as a guide as they develop strategic plans to protect these special places.

“I love the research because it allows me to continue my relationship with national parks and park managers by helping them to fulfill the Organic Act, a federal law that established the National Park Service and outlines the original mission of the parks: to protect the ecological resources and experiential values of these places,” Newman said.