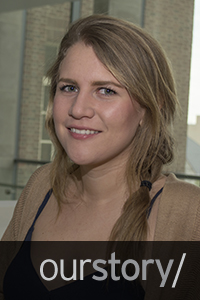 A reference by Ana Daccach’s mother to The King’s Speech ultimately led her to Penn State’s College of Health and Human Development.

At the time, Daccach was considering becoming a doctor like her father, but as her high school graduation approached she became less certain that medicine was the right field for her. That is when her mother brought up the film, which depicts a speech therapist helping England’s King George VI overcome stuttering. Daccach’s mother also pointed out that Daccach’s brother worked with a speech therapist when he was younger.

“She saw that I was into careers that provided services for other people and that were related to medicine,” Daccach said. “She linked the passion the film’s speech therapist had with the passion she saw in me with helping others, so I investigated it and became interested.”

More than 4,500 Penn State students are enrolled in the College of Health and Human Development (HHD) studying a wide array of fields, each committed to the concept of improving the quality of life for others. Daccach, who found a home in the Department of Communication Sciences and Disorders (CSD), is one of those HHD students, and this is her story.

As Daccach investigated speech pathology, she recalled her brother going to speech therapy to improve his pronunciation as well as her cousin with Autism who met with a speech pathologist. A CSD major with a minor in special education, Daccach, who is a resident of Ecuador, is carving out an area of expertise for herself.

“I love all of my CSD courses. I have learned I like the clinical side from my CSD courses,” she said. “At first I thought I wanted to focus only on pediatrics, but now I am interested in many areas, such as Autism, motor speech disorder dystharthia and problems with swallowing. My classes have helped me to see there isn’t just one option.”

Daccach is gaining experience by working in the Speech Production Laboratory in Ford Building with speech-language pathologist and Associate Professor Jimin Lee.

Dysarthria may produce unusually slow, unusually fast, slurred, or disrupted speech that is difficult for listeners to understand. Daccach is helping Lee study patients who suffer the disorder as a secondary result of ALS and other neurological conditions.

“The lab is about finding a way in which people can have better speech intelligibility, so I have learned from Lee’s methods on how to improve that,” she said. “I have an opportunity to learn about the difference between people who speak with normal intelligibility versus dystharthia and how to conduct research as well.”

In graduate school, Daccach hopes to begin studying the anatomy of bilingual speakers in hopes to ultimately improve pronunciation among people who speak a second language.

In addition to CSD, there are a variety of areas for students to study within HHD through the Departments of Biobehavioral Health, Health Policy and Administration, Human Development and Family Studies, Kinesiology, Nutritional Sciences, Recreation, Park, and Tourism Management, and the School of Hospitality Management. Learn more about HHD.