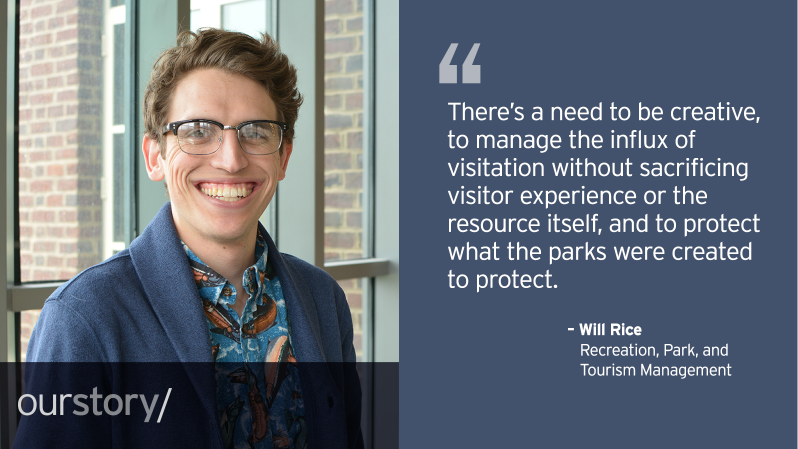 A series of coincidences have fueled Will Rice’s academic path.

As an undergraduate student, Rice found himself working at a variety of National Parks, feeding his passion for public lands and the outdoors. One of those experiences included serving as an intern park ranger through AmeriCorps in 2013, providing interpretation on endangered shorebirds at Cape Cod National Seashore in Massachusetts.

Years later, in 2017, as a doctoral student studying recreation, park, and tourism management at Penn State, Rice found himself once again at Cape Cod National Seashore, this time as co-instructor of the Adventure Literature: Exploring Cape Cod course.

A collaborative course led by the departments of Recreation, Park, and Tourism Management and English, the intellectual activity of the literature assigned to students informs and enhances the instruction and exploration of the culture of the Cape Cod National Seashore and surrounding community. The non-traditional course is an immersive experience that enhances students’ appreciation of the natural world and understanding of how nature, culture and recreation are intertwined.

“Teaching this course was an awesome fit for me and pure coincidence,” Rice said.

And while Rice’s grandfather is an alumnus of a predecessor program of the Penn State Department of Recreation, Park, and Tourism Management, it was a cross-country trip from Alaska with visits to a variety of universities that led Rice, a Pennsylvania native, to choose Penn State as his home.

Rice became interested in public lands in high school, when, once again, by coincidence he happened to catch “The National Parks: America's Best Idea,” a docu-series produced by Ken Burns and Dayton Duncan, on PBS.

“I watched the entire series and I fell in love with National Parks,” Rice said. “I immediately thought, ‘how do I get to these places as a high schooler with no money.’"

Rice’s first step was applying to be part of a trail crew through the Student Conservation Association, which gave him the opportunity to work alongside other students maintaining trails at Wind Cave National Park in South Dakota.

Since then, Rice has found himself working at a variety of National Parks and public lands in various roles, including blazing trails in Yellowstone National Park, as a Ranger at the Missouri National Recreational River and Grand Canyon National Park, and a Directorate Fellow with the U.S. Fish and Wildlife Service in Alaska.

In addition to teaching, as a Penn State student Rice also conducts research, including at

“We’re seeing an increase in visitation at National Parks so it is important to look at how to manage for this increase in use, which we want. At the same time managing the increase can be quite difficult, especially when budgets aren’t getting bigger,” Rice said. “There’s a need to be creative, to manage the influx of visitation without sacrificing visitor experience or the resource itself, and to protect what the parks were created to protect.”

After earning his doctoral degree at Penn State, Rice hopes to work as a social scientist for a land management agency or teach at a university.