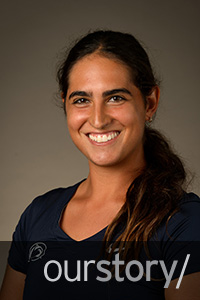 A tennis player most of her life, Melissa Minniti has always loved the components of the sport – the game, the fitness, and the functions of the body.

After experiencing an injury and going through recovery treatment, the junior kinesiology major decided she wants to help other people get back on their feet, too.

More than 4,500 Penn State students are enrolled in the College of Health and Human Development (HHD) studying a wide-array of fields, each committed to the concept of improving the quality of life for others. Minniti, who found a home in the Department of Kinesiology (KINES), is one of those HHD students, and this is her story.

A Schreyer Honors Scholar from Gaithersburg, Maryland, Minniti is majoring in the movement science option in the Department of Kinesiology, and minoring in nutritional sciences. She is a member of the Penn State women’s tennis team, where during the fall 2014 season she appeared in nine singles matches and seven doubles matches.

After getting a stress fracture while playing tennis, part of Minniti’s rehabilitation treatment included active isolated stretching. Active isolated stretching is a technique that involves gradually increasing the injured muscle’s range of motion again through repetitive and gentle targeted stretching. As Minniti went through the recovery process and learned more about the science behind it, she became interested in the field, she said, and decided she wanted to explore other recovery techniques for injuries.

Now Minniti is pursuing the studies of rehabilitation and sport fitness training. Since August 2014 she has been conducting undergraduate research with Stephen Piazza, graduate program director and professor in the Department of Kinesiology, in which she uses accelerometers to determine fall risk in patients with Amyotrophic lateral sclerosis (ALS).

After college Minniti hopes to attend physical therapy school and one day open her own practice that combines rehabilitation services and sport fitness training.

She said her courses in the Department of Kinesiology have supported these interests and challenge her to look beyond what she learns in the textbook.

“I have come to understand the importance of not restricting yourself to what you learn in the classroom,” she said. “It’s important to get the applied science as well and not just the theory behind it.”

Minniti said her professors and advisers, who continue to emphasize to students how to get the most of their educations, have provided her with a multitude of career opportunities.

In July 2013 and 2014 Minniti held an internship at the Aaron Mattes Rehabilitation Clinic in Sarasota, Florida, where she treated and helped patients recover from pain and injuries using therapeutic techniques, including active isolated stretching and strengthening.

She also held an internship in the gait lab of Mount Sinai Hospital in Baltimore, Maryland, in June 2014, where she learned to calibrate, process, and run a gait test using markers and a foot pressure system.

“I really like helping people,” she said. “There’s a joy in seeing injured patients improve. Being an athlete I know what it’s like to be sidelined. I want to be able to give back to people and share what I’ve learned.”

Minniti said one of her goals in pursuing a career is to explore different options and modalities in rehabilitation that haven’t been tried before, in an effort to “expand the boundaries of the field,” she said.

“It’s quality over quantity,” she said about treatment. “I want to make sure people are getting better.”

In addition to KINES, there are a variety of areas for students to study within HHD through the Departments of Biobehavioral Health, Communication Sciences and Disorders, Health Policy and Administration, Human Development and Family Studies, Nutritional Sciences, Recreation, Park, and Tourism Management, and the School of Hospitality Management.