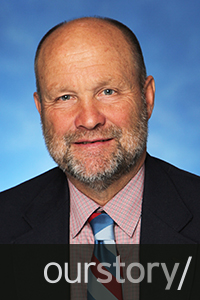 Sometimes Bob Ricketts’ lessons take place outside of the classroom, like in a kayak or on a sailboat, or while trekking the Alps.

At Penn State since 1977, Ricketts is a senior lecturer in the Department of Kinesiology.

“I like to joke that I made a temporary stop here at Penn State in 1977,” Ricketts said.

Ricketts was professor-in-charge of the undergraduate program in the mid-1990s and early 2000s. Throughout his time in the department, he has made many contributions, including the creation of the Kinesiology Club in 1995, which today has more than 350 members.

Ricketts also started a kinesiology alumni roundtable, as well as a kinesiology-specific career fair, which he says has brought more employment opportunities and graduate school hopefuls to Penn State.

One of Ricketts’ biggest contributions, he argues, is his implementation of a series of outdoor experiential courses, which takes students out of the classroom and into the wilderness to develop a variety of life skills, including survival.

Ricketts said he began offering off-site courses about thirty years ago, and through them, students have had the opportunity to embark on many adventures, including sailing, canoeing, backpacking, and hiking, in such places as the Alps and the Florida Keys.

“I built my niche,” he said. “It’s a great way to get the students engaged beyond the classroom.”

But the lesson does not end once the tents are folded. At the end of the course, Ricketts has his students jot down a few goals for life after college: challenges they’d like to take on or projects they want to complete. Students put these goals inside an envelope, addressed to a place they think they’ll be living after college. A few years later, Ricketts sends a postcard to the students to see if they’ve accomplished their goals.

Some former students have achieved their goals of cycling across the United States or surfing the Great Barrier Reef, Ricketts said.

"In Bob's class it was more about the person you became at the end of the semester,” said Jared Melzer, a 2004 kinesiology graduate. “What did you do with the knowledge to better yourself, and more importantly, the people around you? I think that's the golden nugget of education and Bob exemplified that every day."

David Capezzuti, a 1990 graduate with a degree in exercise and sports science, said Ricketts introduced him to experiential education and the wilderness.

“I have often watched on in amazement as he, now past sixty years old, is still so willing to hike in mud and sleep in the rain just to give students the experience and the thrill of outdoor adventure,” Capezzuti said.

Capezzuti, who is owner of Division 7, Inc., an architectural sheet metal fabrication company in Pittsburgh, Pennsylvania, said he first met Ricketts as a freshman at Penn State in 1986 when Ricketts became his adviser.

“You never meet anyone who didn’t love their experience at Penn State,” Capezutti said. “So there must be some other professors out there giving kids a great experience. For me it was Bob.”

In fall 2016, Ricketts will enter his thirty-ninth year of teaching.

“I believe it will soon be time to let the next generation take over,” he said. “But I’m still having fun. Penn State’s been good to me, and I think I’ve been good to Penn State.”