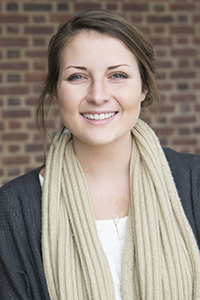 As a child, Cara Antonaccio faced pediatric cancer. While undergoing her treatment, she developed an interest in health and disease prevention.

More so, as she shared hospital rooms with children from other countries who came to the United States for care, Antonaccio became curious about the causes of deterioration of healthcare systems in developing nations.

“My goal is to work with an organization that has a major stake in sustaining and developing health care systems particularly for women and children in conflict settings,” she said.

More than 4,500 Penn State students are enrolled in the College of Health and Human Development (HHD) studying a wide-array of fields, each committed to the concept of improving the quality of life for others. Antonaccio, who found a home in the Department of Health Policy and Administration (HPA), is one of those HHD students, and this is her story.

Antonaccio’s interest in health care systems for developing nations quickly focused on Africa. Specifically, she wants to investigate how violence can influence health, not only direct violence against civilians, but the breakdown of infrastructure as well.

Antonaccio conducted an independent study on displacement and sexual violence in the Democratic Republic of Congo where she said pervasive civil war has resulted in more than 5 million deaths. During the Congo wars in the late 20th and early 21st centuries, Antonaccio said armed groups have targeted women as a means of destabilizing entire communities, with devastating consequences to health.

“In crisis situations, there are distinct and complex sociological dynamics, which are poorly understood by researchers. My coursework in HHD has allowed me to build a better understanding of how complex social and political constructs, as well as health infrastructure characteristics, influence population health and well being,” she said.

For example, in South Sudan, which became an independent nation in 2011 after decades of conflict, Antonaccio said a large number of civilians suffer from depression and post-traumatic stress disorder; however, there is only one hospital that addresses mental illness. This presents a formidable task for health workers: working with few resources in conflict-endemic areas, there are numerous barriers to effectively treating affected populations.

“To address these issues of population health deterioration, we can’t just apply the same western strategies without consideration of the broader picture – these efforts must be underpinned by a nuanced understanding of social, political, and other determinants,” Antonaccio said.

Antonaccio’s interest in health systems in Africa led her to add a second major, African Studies, as well as a minor in Global Health. Last summer, she traveled to Tanzania as part of the Global Health Minor program offered by the Department of Biobehavioral Health. Antonaccio, who is expected to graduate in May 2016, is applying to graduate school and the Peace Corps.

“The stakes with these health issues are so big and access to adequate care is so poor. I hope that through my education and future career, I will be able to improve health outlooks for populations affected by conflict and contribute to the development of sustainable health systems,” she said.