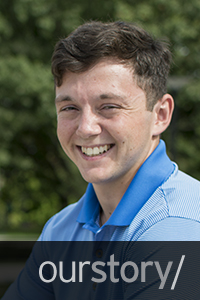 As a childhood cancer survivor, Brady Lucas views Penn State’s IFC/Panhellenic Dance Marathon (THON), a fundraiser for pediatric cancer research and treatment, through a different lens than many of his peers.

His personal experiences with illness at a young age, he says, may also give him a different perspective on health and medicine, two areas he is studying today through Penn State’s Department of Biobehavioral Health (BBH).

More than 4,500 Penn State students are enrolled in the College of Health and Human Development (HHD) studying a wide-array of fields, each committed to the concept of improving the quality of life for others. Lucas, who found a home in BBH, is one of those HHD students, and this is his story.

Lucas, a junior from York, Pennsylvania, learned about THON and Penn State long before he came to the University as a student. Battling childhood leukemia in 2005 and then again in 2010, Lucas was introduced to the scary and uncertain world of cancer, surgery, and chemotherapy. Penn State, THON, and THON’s beneficiary, the Four Diamonds Fund, which provided emotional and financial support to him and his family, gave him an outlet to explore his own passions, which soon became helping others.

Today, Lucas is healthy and an advocate for childhood cancer patients. He wants to make sure other children and families facing cancer have the same support he did.

“My involvement in THON now has kind of come full circle,” Lucas said. “I was a child cancer patient that received support through THON. Now I want to show current THON families I’m here, that there’s a light at the end of the tunnel. These children are my biggest motivators. Right now I can dance in THON, fundraise, and share my story. Maybe one day I can do more. Whatever I can do, that’s what I’m going to do.”

One way Lucas works toward this goal is by serving as THON chair for his fraternity, Phi Kappa Sigma, which is also the fraternity that hosted Lucas as a Four Diamonds child for THON 2012 through 2014. The generosity of Phi Kappa Sigma is what encouraged Lucas to join the fraternity when he enrolled at Penn State.

Lucas also danced in THON in 2016 through his fraternity, and is a speaker and advocate for the Four Diamonds Fund, sharing his story to spread awareness about childhood cancer and the importance of support, financial and otherwise, during treatment. Lucas is also slated to participate in THON 2017, as he was recently selected as a dancer relations captain.

He is also co-founder of the Brady C. Lucas Golf Outing, an annual golf tournament that raises money for the Four Diamonds Fund. To date, the charity has raised more than $211,000 in nine years.

Another interest Lucas developed through his illness and involvement with THON is pediatric hematology and oncology.

The ability to study these areas, and other disciplines, is what drew Lucas to BBH, he said. The major allows him to explore a variety of fields in medicine and culture, including not only Western medicine, but specialized and targeted treatments as well, such as holistic approaches to diseases and conditions.

“I’m the kind of person who looks outside the box,” Lucas said. “Biobehavioral Health offers social and psychological applications to health. There are many different career paths with this major.”

One day, Lucas hopes to establish a children’s hospital in the United States.

“I’ve gone through it,” Lucas said. “I hope that will help me speak to parents of children who are ill. I hope it will help me share my spirit with them, and provide the energy, care, and passion health care providers should have.”

In the future Lucas also hopes to be able to contribute to pediatric oncology research with the goal of developing cancer treatments with less debilitating side effects.

“I’m realizing what I can accomplish through BBH,” he said. “I’m excited about the future. My advisers and professors in BBH share my passion, which helps me to move forward with my education and really focus on my goals.”

In addition to BBH, there are a variety of areas for students to study within HHD through the Departments of Communication Sciences and Disorders, Health Policy and Administration, Human Development and Family Studies, Kinesiology, Nutritional Sciences, Recreation, Park, and Tourism Management, and the School of Hospitality Management.