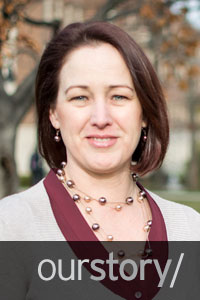 Since high school, Lisa Gatzke-Kopp has been fascinated by the workings of the brain, particularly how thoughts drive actions.

“I was lucky,” Gatzke-Kopp said “I never questioned what I wanted to do. Essentially, I was chasing the brain, constantly looking for classes, and ultimately a job, that would allow me to study it.”

This specific interest, she recalled, was sparked during an AP Biology class during her senior year of high school.

“The teacher gave a lecture on the neuron and it fascinated me to think that we knew the smallest unit of cell that makes up the brain. I thought that must mean we understood how the brain worked and that idea was captivating to me,” she said. “I went home that day and told my parents I wanted to be a neurologist when I grew up. At the time, I didn't know any other career that would be focused on the brain.”

Gatzke-Kopp started college as a biology major, but quickly learned that a major in psychology would better fit her interests.

Today, she is professor-in-charge (PIC) of the graduate program in the Department of Human Development of Family Studies (HDFS).

“What’s compelling to me is the idea that our thoughts and feelings have a biological basis and that maybe we have less control over that than we would like to believe,” she said. “The brain being like any other organ in the body must surely be subject to all of the same problems that can arise in any other system.

“I was just taken with the idea that when we act on emotions that cloud our judgment, even when we know better, those emotions are coming from somewhere biological and are very hard to override. I wanted to understand that process developmentally, and how that can go wrong,” she said.

Now in her role as PIC, Gatzke-Kopp is not only contributing to the research she feels passionate about, she wants to help students follow their own paths as well.

Gatzke-Kopp has served as associate professor of HDFS since 2013. She said taking on the role of PIC last summer felt like a natural next step in her career, as she has built a solid foundation for her research, and is now interested in supporting students and junior faculty.

“It’s a time in my career when I can give back,” she said. “I hope I can also be a role model to women in this field. I hope to show female students they don’t have to choose between a family and a career if they don’t want to. They can have both.”

As PIC, Gatzke-Kopp oversees students from admission to graduation, making sure they meet degree requirements.

Through her role she hopes to help students discover what areas of work interest them, and then encourage them to pursue those interests through coursework, research or other experience.

As for Gatzke-Kopp’s work, she focuses on the development of emotional and behavioral problems in childhood.

“Research has shown that problems such as aggression, hyperactivity, and substance abuse likely evolve when vulnerability interacts with environmental stressors,” she said. “Understanding and identifying these connections positions researchers, and eventually policymakers, to implement changes in the environment that may alter these trajectories and improve developmental outcomes.”

Gatzke-Kopp, also a graduate faculty member in the neuroscience program in the Huck Institutes of the Life Sciences at Penn State, is involved in several collaborative projects aimed at incorporating knowledge from basic psychophysiological research into preventive-intervention programs.

She is also principal investigator at the Child Brain Development Lab, which is focused on the study of understanding how to optimize preventive intervention programs to promote positive development. Projects span various developmental stages and aim to understand how individual differences in vulnerability interact with environmental risk factors within the family, schools, and communities.