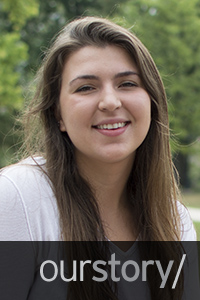 When Nicole Vairo, a Kinesiology senior, spent a semester abroad studying sports science in Australia, it became clear to her that the field of kinesiology is widely applicable—at Penn State and across the globe.

“My time in Australia broadened my world view of kinesiology. It showed me the field of kinesiology has a place somewhere else, other than just here at Penn State. What you learn can be taken out into the field.”

More than 4,500 Penn State students are enrolled in the College of Health and Human Development (HHD) studying a wide-array of fields, each committed to the concept of improving the quality of life for others. Vairo, who found a home in the Department of Kinesiology (KINES), is one of those HHD students, and this is her story.

During her time at the University of Queensland in Brisbane, Australia, Vairo studied biomechanics and also had the opportunity to be a laboratory volunteer working with researchers in public health. She also learned the sports history of Australia, which she was able to compare to the history of American sports.

Vairo said her study abroad experience was important in establishing herself in the kinesiology field outside of Penn State, and helped her realize her expertise can be needed and applied across the globe. It also gave her a chance to break outside of her comfort zone, which previously was State College, she said.

The New York native is in the movement science option of the Kinesiology major and minoring in psychology.

At Penn State, Vairo was a research assistant at the Physical Activity and Public Health Laboratory. There she learned ethical practices for research, built skills in data collection and interpretation, and worked on papers for both Bike Friendly Businesses and Universities, initiatives of the League of American Bicyclists, under the direction of Melissa Bopp, associate professor of kinesiology.

Vairo also volunteered at Penn State’s University Health Services in the physical therapy department. As a physical therapy assistant, she integrated data collected into a rehabilitation plan and compared pre and post therapy performance in a quantitative manner.

Off-campus, Vairo worked as a nutrition educator for City Harvest, a nonprofit organization that aims to end hunger in communities throughout New York City. There, she communicated general concepts in nutrition and physical activity to people with minimal educational background. She also worked with a team to set up and perform cooking demonstrations in low-income communities.

Vairo’s other volunteer work as an undergraduate was at Sports Therapy and Rehabilitation Services in Long Island, New York, where she served as a physical therapy assistant. In this role she prepared lumbar and cervical hot wraps and ice packs for various injuries. She spoke to clients regarding the nature of their injuries and shared preventative measures to avoid repeat injuries.

Vairo said both her lab and volunteer work helped solidify her choice to pursue public health as a career.

Public health speaks to her, she said, because she wants to help people by changing the way public health is managed and delivered.

General health, which can be achieved through access to clean water, food, and shelter, are basic human needs, Vairo said. Many people don’t have access to these resources because of circumstances beyond their control, such as race or socioeconomic status, she said.

Vairo wants to change that, in part through social interventions, such as offering affordable, healthy produce in urban or rural supermarkets, or in places where people wouldn’t otherwise have access to fresh produce.

“I want to encourage kinesiology students who might want to go down a less traditional path to discover what they really want. For me it was public health and for others it may be something different.”

After graduation Vairo plans to take a year off school to travel, try organic farming, and then pursue her master’s of public health at a university in the United States.

In addition to KINES, there are a variety of areas for students to study within HHD through the Departments of Biobehavioral Health, Communication Sciences and Disorders, Health Policy and Administration, Human Development and Family Studies, Nutritional Sciences, Recreation, Park, and Tourism Management, and the School of Hospitality Management.