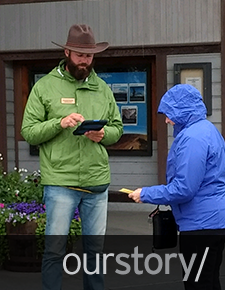 Student Jeremiah Gorske, a veteran of the U.S. Army, is turning his love for the outdoors and educating others about the environment into a career. As part of that process, Gorske is an undergraduate research assistant for Derrick Taff, assistant professor of Recreation, Park and Tourism Management, and is tackling meaningful research with the National Park Service.

In 2016, the National Park Service partnered with Subaru of America and the National Parks Conservation Association to pilot a Zero Landfill Initiative in Grand Teton, Yosemite, and Denali National Park and Preserve. Related to that initiative and through a Health and Human Development Undergraduate Research Grant, Gorske accepted an internship with the Colorado-based Leave No Trace Center for Outdoor Ethics.

The Center, along with researchers from Penn State, began a three-month research study to explore National Park visitor exploring attitudes and perceptions regarding waste management in parks. As part of that project, and through his internship with the Center, Gorske spent his 2017 summer exploring attitudes and perceptions of park managers regarding waste management. The data Gorske collected from park managers will be coupled with data from the larger study of park visitors to paint an accurate picture of how the Zero Landfill effort can be most successful over time.

“I thought that it would be important to understand National Park Service managers’ thoughts and attitudes toward the Zero Landfill Initiative,” Gorske said. “This information could then be shared among different National Parks to inform other park managers as well as ultimately expand the initiative across the country.”

The most common theme reported by managers is that in order to reach a zero landfill goal in parks, educating the public should be a critical first step.

“Many of the managers I have interviewed believe that if education begins at home, then visitors can plan to minimize the amount of waste they bring and create while in the park,” Gorske said.

Conducting research through the Center, as part of a seven-person team, has reinforced for Gorske the importance of team work, and helped him realize for future studies that no research is truly accomplished independently.

After graduation, Gorske hopes to become a Federal Conservation Officer with the U.S. Fish and Wildlife Service and start an experiential education farm to teach the public about regenerative agriculture and sustainable food systems.

To help get him on his way, Gorske credits the people he’s met while at Penn State.

“The network of people I have met through my time at Penn State has opened many doors for me. In fact, the people I have met are the reason I was offered a role in the National Park Service study. As a member of the Recreation, Park and Tourism Management program, I feel as though I am not just another student, but a member of a family,” Gorske said.