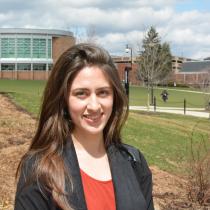 Speech-language pathology is about helping people who are not able to communicate the way they want. I want to be an advocate for people who cannot speak for themselves.
Emma Crawford
Communication Sciences
and Disorders

As a young girl whose cultural and family heritage traced to the Ojibwe American Indian tribe in Wisconsin, Emma Crawford experienced a unique transition when she started attending a public, mainstream school. That’s when she had to learn how to operate in a new culture with new expectations, while also maintaining the culture and expectations of her family’s heritage.

That transition, coupled with inspiration from her mother and grandfather who spent their lives in the field of advocacy, motivated Crawford to start the graduate program in communication sciences and disorders at Penn State after earning a bachelor’s degree in animal science with minors in business and education at Cornell University.

“My grandfather and mother instilled in me a sense of ‘you must advocate for people who cannot advocate for themselves,’” Crawford said. “I’ve always had soft spot for the kiddos, and I realized that I do want to be working with kids and families, similar to what my grandfather and mother have been doing. Speech-language pathology is all about helping people who are not able to communicate the way they want. I want to be an advocate for people who cannot speak for themselves and provide them with a way to express themselves.”

Under the supervision of Krista Wilkinson, professor of Communication Sciences and Disorders, for her master’s program thesis, Crawford has been testing an instrument called the “Early Development of Emotional Competencies” (EDEC) that Wilkinson developed to gauge how parents and children with communication disorders communicate emotions, which can differ based on culture.

Researchers also know that families and members of particular cultures communicate emotions differently, therefore the assessment tool Wilkinson developed and Crawford is testing could potentially be used across different families, and has already been piloted with multiple groups, including Mandarin Chinese, Korean, Mexican American, and American Indian.

“If speech-language pathologists are teaching children how to follow mainstream practices when those are not the practices learned at home then they are not providing best care for them,” Crawford said.

Ultimately, this tool could have broad application, but it will be most helpful to cultures with the broadest gap between mainstream and personal cultures, especially among children with severe communication disorders.

“Children with severe communication disorders often do not know best way to interact interpersonally, how to make eye contact, how to use body language, or how to exchange messages,” Crawford said. “Speech-language pathologists are tasked with teaching them detailed ways to communicate that comes naturally to most people, and a big part of natural communication is how we learned it at home from our parents and that is culturally tied.”

Crawford added, “As speech-language pathologists, we teach kids about emotions and best ways to express themselves, but if we are teaching children to express themselves in ways that their parents aren’t comfortable with then we are not teaching them the best way to communicate with their families in the context of their culture and their individual identity.”

Wilkinson and Crawford’s ongoing research shows that there are differences in cultural communication practices and that these differences should be taken into account when speech-language pathologists are providing therapy.

“Speech-language pathologists and teachers can use this to ask the family what their practices are, what emotions they are willing to express in front of the child, and more, in order to provide the best care for the child,” Crawford said. “This is particularly helpful for children with severe communication disorders who cannot communicate through speech and require a lot of teaching about communication.”