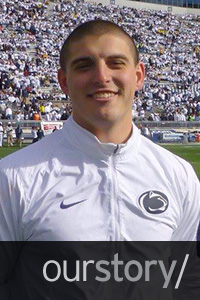 A high school sports injury may have taken Christopher Blaszka out of the game and onto the sidelines, but it also opened his eyes to something else: the world of athletic training.

“I played multiple sports in high school, but my favorite was soccer,” Blaszka said. “I was injured during a practice and was brought into the athletic training room. While being treated for my injury over the next week I started asking my athletic trainer what the profession was all about.”

After many discussions with his athletic trainer, Blaszka applied to Penn State.

“I got into the athletic training program, and have never looked back,” he said.

More than 4,500 Penn State students are enrolled in the College of Health and Human Development (HHD) studying a wide array of fields, each committed to the concept of improving the quality of life for others. Blaszka, a New Jersey native, graduated in spring 2016 with a Bachelor of Science degree in Athletic Training offered through the Department of Kinesiology.

“I enjoy that every day I get to help someone else,” he said. “You never know what the next day will hold. I enjoy the fact that every athlete offers a puzzle to solve and challenges me to find the problem and come up with the solution.”

Now Blaszka is attending graduate school in Arkansas to pursue a degree in sports management.

While at Penn State, Blaszka completed his clinical athletic training experience working with athletes on Penn State’s football, men and women’s gymnastics, and women’s lacrosse teams. He was also a sport health aide at Penn State Sports Camps at University Park, and an undergraduate teaching assistant for the course, Introduction to Athletic Training (KINES 135). Blaszka had the opportunity to work with and lead six juniors during a football clinical rotation. At first he found it to be a challenge, but the opportunity ultimately pushed him to learn how to emerge as a leader in a group of peers, relay information clearly and effectively, and work as a part of a team.

“My leadership style revolves around asking for the groups input as much as possible,” he said. “I want to know what is working, what is not, and if there are areas that they see can be improved. Having open lines of conversation as well as being an understanding leader is extremely important to me.”

Giampietro Vairo, clinical assistant professor, program director and clinical education coordinator of the Athletic Training major, said, “Chris interacts extremely well with each and every individual that intersects with our curriculum; in this fashion, he embodies a model representative of our program, and the athletic training profession.”

Blaszka said the professors and preceptors in the Department of Kinesiology and athletic training program gave him the tools and skills to succeed at his career and in life.

“Everything I know and all the skills I have developed are because of the faculty we have,” he said.

After graduate school Blaszka hopes to become an athletic trainer, and maybe even one day a professor.

“I really enjoy teaching and watching people practice and perfect different skills,” he said. “From rehabilitation of major injuries to preparing the athletes for a practice or game day, I enjoy being a part of the return to play process.”

Additionally, athletic training is moving towards using research as a basis for choosing various modalities and procedures for rehabilitation and recovery, and he would like to be able to contribute to that during his career.

“I want athletic training to be even more respected in the medical community and I believe that increasing research will continue to make athletic training a distinguished career. I would like to leave my mark by helping to improve the profession as a whole and move us in the direction of being increasingly medically sound.”

In his senior year at Penn State, Blaszka was recognized as a “Student Spotlight” by the Pennsylvania Athletic Trainers’ Society in its quarterly newsletter. The purpose of the student spotlight is to showcase one undergraduate student in the Commonwealth of Pennsylvania for his or her outstanding leadership and work as an athletic training student.

The Athletic Training major in the Department of Kinesiology provides a concentrated program of courses designed to prepare students for a career in the profession of athletic training. The major has been designed to meet the standards for certification by the National Athletic Trainers Association — Board of Certification and legal certification by the Commonwealth of Pennsylvania. Students complete a five-semester sequence of coursework and supervised clinical rotations. For more information visit hhd.psu.edu/kines/undergraduate/athletic-training.