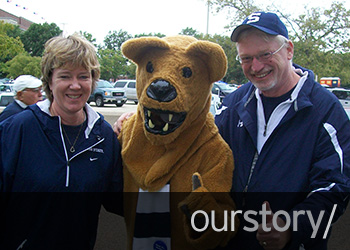 Sometimes the subject students study in college does not end up being the field in which they work for the duration of their professional career.

However, for Steve Landes, who graduated in 1974 from Penn State with a bachelor’s degree in parks and recreation with an emphasis in administration, he spent his entire career in the same field and with the same employer.

For forty years, Landes worked for Muhlenberg Township, a community of roughly 19,500 people in Berks County, Pennsylvania, serving as director of Parks and Recreation until 2006 when he was named township manager. He retired in 2015.

“I’ve enjoyed the rare opportunity to work for a single employer during my 40-plus year career,” Landes said. “I can’t imagine a better job than working in community parks and recreation. It’s not just because I had the opportunity to plan and carry out activities that make people happy or to acquire land and build parks that people value.”

Landes said that it is great watching people enjoy themselves knowing he was involved in helping them learn or become healthier while the community benefits by seeing a reduction in the expenses associated with crime or healthcare and becoming a more attractive and vibrant place.

Interestingly, Sue’s career has also been entirely within the local government sector in Pennsylvania, from administrative assistant to the director of parks and recreation with the Westmoreland County Parks Department to recreation services coordinator for the Chester County Parks and Recreation Department to her current position as the executive director of the Lancaster Recreation Commission, which she has held since 1987.

Sue also conducts consulting work for the Pennsylvania Department of Conservation and Natural Resources with municipalities across the commonwealth.

“As a community recreation professional, I’ve been responsible for planning, organizing and directing a wide variety of community services, activities, programs, and events through the years,” Sue said. “Ultimately, I’ve played a critical role as a catalyst for social change – engineering experiences that lead to health and wellness and an enhanced quality of life among individuals, families, and the community. Most important to me is how parks and recreation contributes directly to social equity. Children especially benefit from recreation services, offering them affordable or no-cost opportunities to play, learn, and grow. When our children thrive, our community thrives.

“I’ve gone to a job I love every day. That’s something everyone wants – and many don’t have. Helping people and bettering my community are what keeps me happy.”

The Landes reside in Denver, Pennsylvania. The couple has five children and eight grand children.

In addition to Recreation, Park, and Tourism Management, there are a variety of areas for students to study within the College of Health and Human Development through the Departments of Biobehavioral Health, Communication Sciences and Disorders, Health Policy and Administration, Human Development and Family Studies, Kinesiology, Nutritional Sciences, and the School of Hospitality Management. Learn more about HHD.